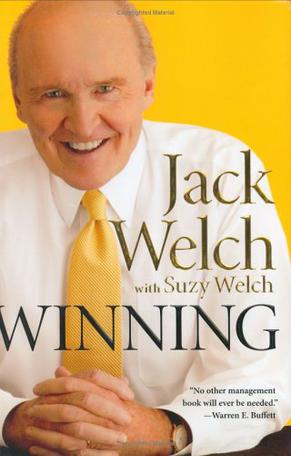 《赢》的内容涵盖从管理理念到管理实践的诸多方面。杰克·韦尔奇将自己全部的管理心得和智慧通过《赢)》与更多的管理者交流。从企业中泛滥而空洞的“使命”说起，谈到每家公司都会面临的危机管理，再到预算管理、员工招聘等诸多日常工作，韦尔奇逐一提出了自己独特而富有智慧的解决方案，并与广大读者分享了他作为成功管理者的思维方式。 作为“全球第一CEO”，韦尔奇不惜笔墨地总结了自己成功的职业生涯，为每一位职业经理人提供了极富建设性的意见和理念。 我们推荐企业高层管理者阅读《赢)》，因为你可以从中全面审视并深入思考自己的管理理念和方式、方法。 然而，《赢(第2版)》最为神奇的地方在于，无论你是财务人员，还是生产线上的技术工人；无论你是部门管理者，还是最基层的普通员工，《赢(》都将有利于你更好地了解你所在的工作环境，理解陌生部门的工作，甚至理解公司高层的指令和意图，进而帮助你与同事一道改善工作流程、提高工作效率；同时也完善自己的职业规划。 当然，最重要的是，这《赢》将帮助你和周围的人更从容地面对未来的挑战。 If you judge books by their covers, Jack Welch's Winning certainly grabs your attention. Testimonials on the back come from none other than Warren Buffett, Bill Gates, Rudy Giuliani, and Tom Brokaw, and other praise comes from Fortune, Business Week, and Financial Times. As the legendary retired CEO of General Electric, Welch has won many friends and admirers in high places. In this latest book, he strives to show why. Winning describes the management wisdom that Welch built up through four and a half decades of work at GE, as he transformed the industrial giant from a sleepy "Old Economy" company with a market capitalization of $4 billion to a dynamic new one worth nearly half a trillion dollars. Welch's first book, Jack: Straight from the Gut, was structured more as a conventional CEO memoir, with stories of early career adventures, deals won and lost, boardroom encounters, and Welch's process and philosophy that helped propel his success as a manager. In Winning, Welch focuses on his actual management techniques. He starts with an overview of cultural values such as candor, differentiation among employees, and inclusion of all voices in decision-making. In the second section he covers issues around one's own company or organization: the importance of hiring, firing, the people management in between, and a few other juicy topics like crisis management. From there, Welch moves into a discussion of competition, and the external factors that can influence a company's success: strategy, budgeting, and mergers and acquisitions. Welch takes a more personal turn later with a focus on individual career issues--how to find the right job, get promoted, and deal with a bad boss--and then a final section on what he calls "Tying Up Loose Ends." Those interested in the human side of great leaders will find this last section especially appealing. In it, Welch answers the most interesting questions that he's received in the last several years while traveling the globe addressing audiences of executives and business-school students. Perhaps the funniest question in this section comes at the very end, posed originally by a businessman in Frankfurt, who queried Welch on whether he thought he'd go to heaven (we won't give away the ending). While different from the steadier stream of war stories and real-life examples of Welch's first book, Winning is a very worthwhile addition to any management bookshelf. It's not often that a CEO described as the century's best retires, and then chooses to expound on such a wide range of management topics. Also, aside from the commentary on always-relevant issues like employee performance reviews and quality control, Welch suffuses this book with his pugnacious spirit. The Massachusetts native who fought his way to the top of the world's most valuable company was in many ways the embodiment of "Winning," and this spirit alone will provide readers an enjoyable read. --Peter Han 点击链接进入中文版： 赢(第2版)